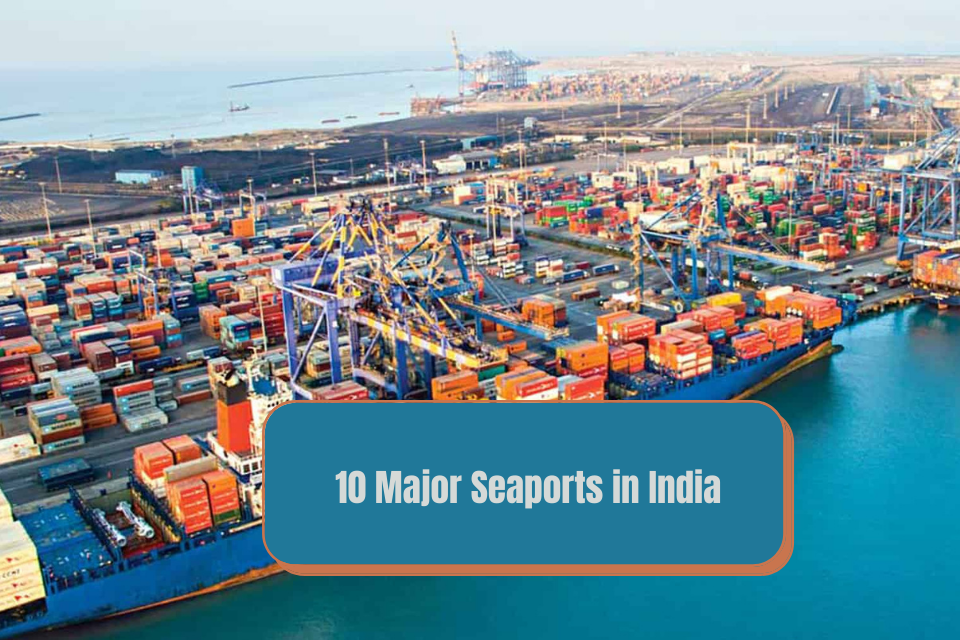 Seaports have been the backbone of the trade and economy of the world. There are many seaports in India that facilitate the transportation of goods worth billions of dollars every year.

The sea ports are the lifeline of the country’s economy. In this article, we will be taking a look at the major seaports in India and how they work. Let’s dive right in!

Below given are the details of the major seaports in India, all of these ports are equipped with state-of-the-art facilities and are tightly monitored by authorities and management for any irregularities and issues.

Located in the proximity of the financial capital of India, the Jawahar Lal Nehru port is one of the biggest and most active ports of India, Mumbai is a big hub for import and export, the city has a massive population and has every infrastructure to support the trades.

Ranked 28th among the world’s top container ports, this port handles 55% percent of the total container cargo passing through India. The port was opened in 1989. The Jawahar Lal Nehru port is managed by DP world and is amongst the first privately managed ports in India. Several other plans and processes regarding seaports in Mumbai are undergoing, these ports will handle more than 10 million tons of cargo each and will be managed by international companies too.

The Chennai Port, as the name suggests is located in Chennai, Tamil Nadu, and is the biggest port located on the southern tip of the Indian mainland. The Chennai port is one of the oldest operating modern seaports, functioning since 1881.

This port manages a massive 50 million tons of cargo each year and has been the backbone of Chennai’s automobile industries by helping them import steel. The Chennai port also majorly exports automobiles. The current container handling capacity for the Chennai Port is at 2 million TEUs. Chennai Port is also seeking to increase its handling capacity by 100 million tons.

Mundra port is managed by Adani Ports and SEZ limited and is the largest privately managed seaport in India. Gujarat is the hub for business in India, and there are tremendous amounts of imports and export.

The Mundra port has a bigger advantage over other ports as it is well connected to the railway routes all across India. Also, the Mundra Airport is undergoing several changes for it to become an International airport for air cargo.

The port handles a massive 5 million TEUs and 338 million metric tons of cargo. The Mundra port also holds the title of the largest coal import terminal in the whole world.

Located on the eastern ghats, Visakhapatnam port is the center of arrival for cargos on eastern ghats. Visakhapatnam Port is the largest harbor in all of Andhra Pradesh. The unique location of the port makes it even more favorable as it is situated in the most active regions of the country, between Chennai and Kolkata ports.

The Visakhapatnam port handled 0.43 million TEU units and has a cargo capacity of 72.73 million metric tons. The port is already on its course of expanding, RINL has begun operations out of Vizag for its expansion.

Approximately 100 years old, the Cochin port in Kerala experiences traffic from the Arabian Sea and Indian ocean. The port was established by the British in 1928 to facilitate trade from countries in the Gulf. The Kochi port is also the home to ICTT, The international container transshipment terminal, which is the largest container facility in India.

The Cochin port has a gross cargo tonnage of 32.03 million metric tonnes and a TEU traffic of 0.6 million units. Cochin port witnesses around 1500 vessels visit every year. This port is well connected with railways, highways, and international airports too. There is a naval base nearby.

The Kandla port of Gujarat is yet another hub for imports of petroleum and gases from the gulf, this port is located on the gulf of kutch and lies close to the Karachi port of Pakistan. Kandla port is also closely located to Kandla special economic zone, KASEZ, which is one of the first and biggest SEZ in all of asia.

The port majorly exports Salt and textiles and has a capacity of 122.5 million metric tons for cargo and a TEU traffic of 0.17 million units. The port is also undergoing several upgrades to improve the handling capacity and the surrounding areas.

The port of Mumbai is one of the most known and recognizable ports in India, all of this because of its unique history and importance. The port is more than 300 years old and was established in the late 17th century by the British. The Jawahar Lal Nehru port was opened to ease the traffic on Mumbai port, the Mumbai port currently handles bulk and general cargo.

The Mumbai port handles a gross cargo tonnage of 62.9 million metric tons and TEU traffic of 40000 units. There are over 41 births and the port spans over 400 Sq. KMs.

The Land of business has yet another major port to offer on this list. The Hazira port of Gujarat is related to one of the biggest import and export centers of India, Surat. It is one of the most important petroleum and LNG harbors on the western coast and is managed by Adani Hazira Port Private Limited. Hazira port is one of the most advanced ports of India and handles vessels from Europe, Africa, America, and the Middle east.

Hazira port has a perfect location on the Delhi-Mumbai special economic zones and lies close to the ports in Mumbai. There are expansion activities going on in the port and it will soon be able to handle more traffic. At present, the port can handle 1 million TEU units and cargo tonnage of 2.5 million tons.

The 4th largest container terminal. VOCP port is an ISO-certified port and handles traffic from China, Sri Lanka Mediterranean, and the USA. The port spans over only 8 sq. KMs  and is the prime exporter of raw materials and agricultural goods.

The VOCP port manages roughly 7% of India’s total container traffic and is undergoing a $1 billion expansion project. There is also a space for passenger cruises on the port. Currently, the port manages 36 million tons of cargo and 0.8 million TEU units.

Located at one of the most serene locations in Goa, the Marmagao port in Goa has a state-of-the-art mechanized material handling system of conveyers and a cargo capacity of 7 million metric tonnes. The Marmagao port of Goa also has specialized berths for the navy and is undergoing huge expansion activities. The port is one of the most recently declared major ports of India.

India has a great advantage when it comes to trade, the governments, time and again have understood this and always worked towards the improvement of facilities when it comes to ports. India is home to a vast variety of exports, and these ports help in making made in India reach out to the world.